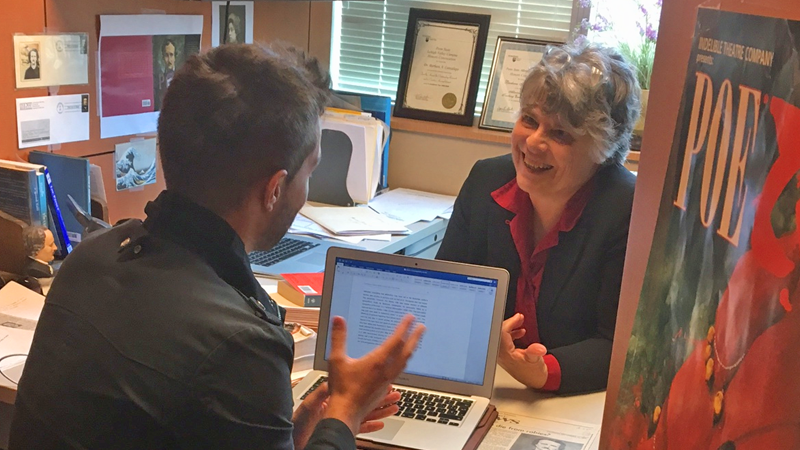 Dimitrios Tsokanos, a doctoral candidate from the University of Almeria, located in Almeria, Spain, has been a scholar in residence at Penn State Lehigh Valley working with Barbara Cantalupo, professor of English.
By: Dennille Schuler
Barbara Cantalupo mentors doctoral student on Poe thesis

Dimitrios Tsokanos, a doctoral candidate from the University of Almeria, located in Almeria, Spain, has been a scholar in residence at Penn State Lehigh Valley working with Barbara Cantalupo, professor of English. His adviser, José R. Ibáñez Ibáñez, is supervising Tsokanos’s thesis on the Hellenic influences in Edgar Allan Poe’s work. This is particularly interesting to Tsokanos since he is Greek and also since very little has been published on this subject. To Tsokanos, his next step was clear. He said he knew he had to come to Penn State Lehigh Valley to work with Cantalupo.

“Dr. Cantalupo is famous in Spain. She is a major Poe scholar; if you want to advance in the study of Poe, I think you have to come here to study with her,” said Tsokanos. “I have the ceaseless support of my adviser, Dr. José R. Ibáñez Ibáñez, who constantly urges me to do my best. However, working with Dr. Cantalupo has been tremendously beneficial for my dissertation.”

Cantalupo has taught at Penn State Lehigh Valley since 1989. She is the founding and current editor of The Edgar Allan Poe Review, a scholarly, peer-reviewed journal dedicated to the American author's life and work.

“In graduate school, I read Poe’s ‘Eureka,’ and I was determined to unravel its mysteries,” said Cantalupo.

That research grew into one of the chapters in her dissertation, and after that she was hooked on Poe.  In 1996, she became editor of the Poe Studies Association (PSA) Newsletter, a four-page document that grew under her editorship into a 24-page newsletter. The time was right, then, for it to become the PSA’s official peer-reviewed journal. Very few women were involved in Poe studies, so her editorship of this journal was a coup for women scholars.

Tsokanos’s visit is not the first time someone from another country has requested to learn from Cantalupo. She has also supervised research for another doctoral candidate from Spain, a Fulbright scholar from Sweden and a junior faculty member from Algeria.

Tsokanos came to Center Valley on Aug. 29 and stayed until Sept. 29, visiting the Lehigh Valley campus to work on his research nearly every day. Besides running ideas past Cantalupo and asking for her input or direction on a topic, Tsokanos also benefited from the vast resources Penn State has to offer.

“During his visit, Dimitrios was able to use the Penn State library system as well as the many folders of notes and Poe books I inherited from two renowned Poe scholars, Burton Pollin and Eric Carlson,” said Cantalupo. “I took Dimitrios to University Park to tour the library and visit with Richard Kopley, Penn State DuBois distinguished professor emeritus of English, who is a fellow Poe scholar and someone who encouraged me early on in my Poe studies. I hope these experiences provided Dimitrios with inspiration for his thesis.”

At the end of September, Tsokanos took the bus to Philadelphia so he could tour Poe’s historic home, part of the National Park Service, and walk the streets where Poe walked. 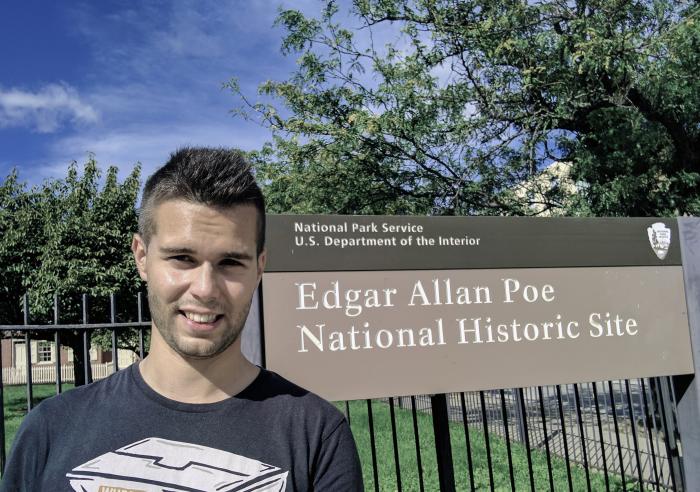 Dimitrios Tsokanos took the bus to Philadelphia at the end of September so he could tour Edgar Allan Poe’s home, an historic site part of the National Park Service, and walk the streets where Poe walked.

“The resources I have been able to find here have been wonderful,” said Tsokanos. “The library in Dr. Cantalupo’s office alone is a Poe scholar’s dream.”

Cantalupo’s current research on Poe involves the author's visual legacy. One aspect of that research reveals that Poe chose F.A.O. Darley to illustrate “The Gold-bug,” and his illustrations may have helped the story win a prize.

“Although Poe’s story was about the adventure of finding a hidden treasure, the underlying message relates to the letdown that follows such success, a feeling of depression. One of the illustrations by Darley shows this undercurrent of meaning,” said Cantalupo. “Poe always wove in an undercurrent of meaning in his work. Although he wrote to satisfy his audience, the stories always suggest more than what’s on the surface.”

Cantalupo also serves as editor of Lehigh University Press’ “Perspectives on Poe” series. She has published extensively on Poe. Her monograph, “Poe and the Visual Arts,” won the Patrick Quinn Award for best monograph on Poe for 2014; her edited books include “Poe's Pervasive Influence,” “Emma Wolf's Short Stories in the Smart Set,” and “Emma Wolf's Other Things Being Equal” as well as a co-edited book with Richard Kopley, “Prospects for the Study of American Literature, Vol. II.” She and Richard Kopley are currently editing a collection of selected essays from the 2015 Poe Studies Association's Fourth International Edgar Allan Poe Conference, and she and Lori Harrison-Kahan are working together to re-issue a scholarly edition of Emma Wolf's 1900 novel, “Heirs of Yesterday.”

Tsokanos and Cantalupo will get to reunite in January 2018 when Cantalupo will travel to Spain, where she was invited to be a plenary speaker at the First International Spanish Edgar Allan Poe Society Conference: Poe in the Age of Populism, to be held at the University of Valladolid. Cantalupo’s talk will explore artists who either illustrated Poe’s work or created their own art works related to Poe’s themes.

“More than 700 artists have responded to Poe’s work. His writing is visually evocative and his details often end with a surprise. Poe was always interested in the effect his writing can have on the reader,” said Cantalupo.