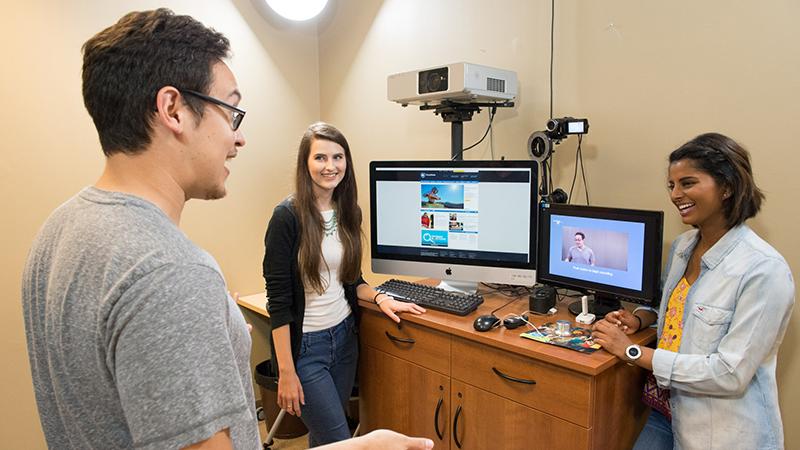 Penn State Lehigh Valley’s Multimedia Innovation Center (MIC) began as an idea to provide assistance to students, faculty and staff with video related projects, and in just three years, has turned into an essential asset of the Lehigh Valley campus.

In 2013, the forward thinking administration of Penn State Lehigh Valley saw the need for a video resource on campus as more class assignments, projects and lectures involved the use of this technology.

Liz Keptner, an accomplished veteran television journalist and Emmy nominee, came on board as the director After she collaborated with Barry Fisher, WFMZ general manager, on the design and reviewed which technical equipment to purchase, the Multimedia Innovation Center (MIC) was born. And soon after, Amber Campbell was hired as the MIC’s videographer and editor. The MIC also employs student workers to help with day-to-day operations. 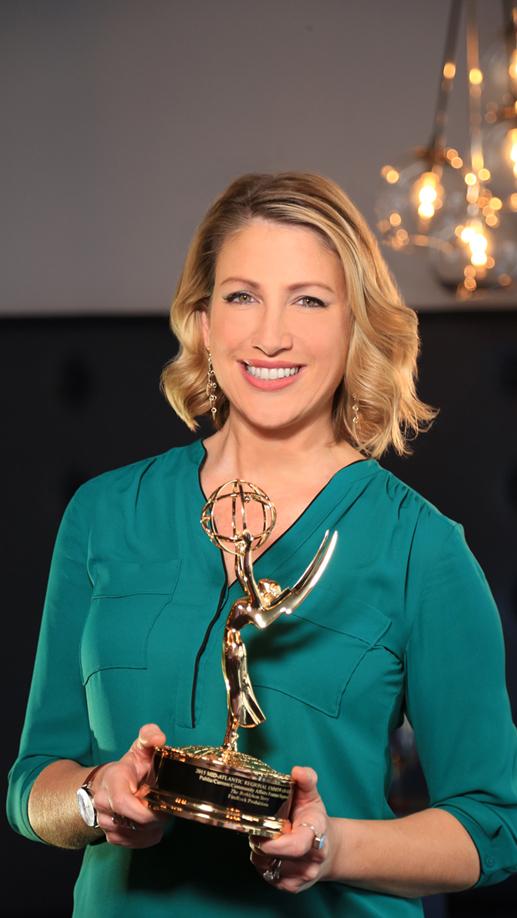 Liz Keptner, director of the Multimedia Innovation Center at Penn State Lehigh Valley, was the host of the Emmy award-winning "The Bethlehem Story" by  FireRock Productions. She is nominated for an Emmy this year in the Magazine Program/Special category for her producing work on "Nazareth: Resonating Through Time."

This month the MIC is celebrating its third anniversary, along with many successes and accomplishments.

The MIC has become a powerful tool to tell the stories of the Lehigh Valley campus’s faculty, staff and students through video. Since it was created, the MIC has produced over 150 videos recognized by national and international audiences. These videos were created for internal and external marketing purposes to increase the visibility and enhance the reputation of Penn State Lehigh Valley. Many of the videos are completed within just one or two days, making the MIC like Penn State Lehigh Valley’s own in-house video production company. And the reputation of the MIC is far-reaching. When Happy Valley LaunchBox celebrated its ribbon cutting ceremony earlier this year, Keptner and Campbell were asked to create a video, and traveled to University Park, to film the event.

“I love interviewing people and telling their stories, it’s the reporter in me. With Amber’s outstanding camerawork and editing, we’re able to showcase the amazing things Penn State has to offer,” Keptner said.

Aside from assisting in digital media creation, the MIC also offers equipment rental, green screen availability, storyboarding and One Button Studio training. Penn State Lehigh Valley is one of only a few Commonwealth campuses to have its own One Button Studio, which is a video recording studio that operates with ease of pressing only one button to record, instead of having to set up a video camera.

Admittedly, students were hesitant to use the MIC at first. They did not understand all that it had to offer, however, they soon realized just how easy it was to learn to use the equipment and technology inside. Students regularly and easily utilize the One Button Studio, the green screen and recording equipment, among other pieces of technology, in the MIC.

“We live in a digital world. Having the MIC on our campus, staffed by two industry professionals to guide our students with their projects, presentations and communications skills is paramount to their success in life,” said Mike Krajsa, instructor in business at Penn State Lehigh Valley. “The One Button Studio enables our students to practice oral, visual and communication skills for presentations and job interviews.” 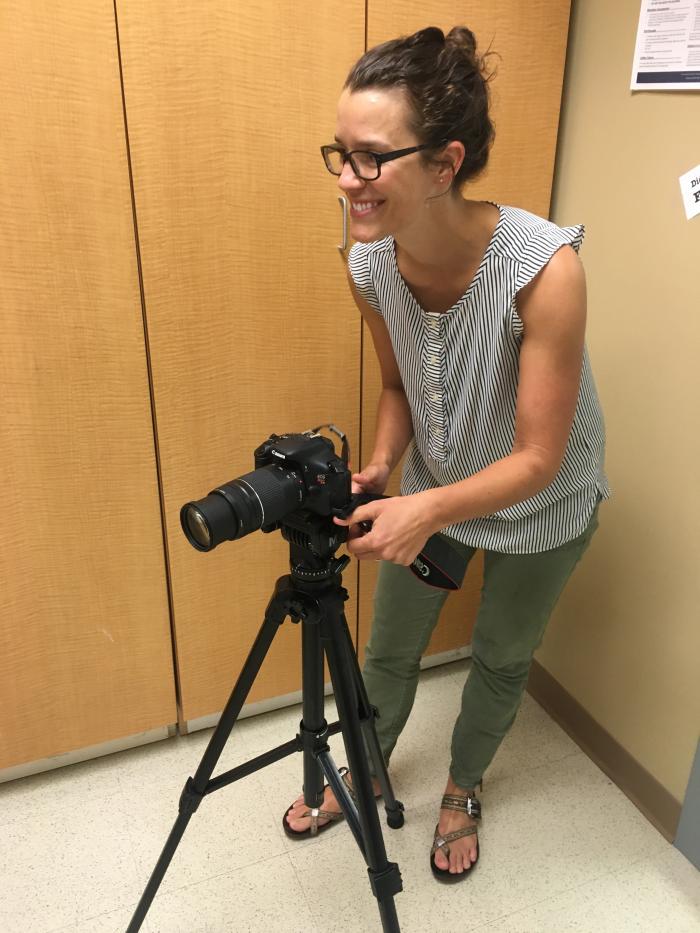 The MIC provides everyone who walks through its doors with extensive training on its equipment and software, including platforms like Adobe Creative Cloud and Premier. This makes people more comfortable to use the equipment, both in the MIC and on their own computers.

In order to enhance their teaching, many Penn State Lehigh Valley faculty members take advantage of the technology the MIC has to offer. Professors and instructors use the One Button Studio and Final Cut Pro to create online video lectures for their students. The MIC recently worked with Jaqueline McLaughlin, Ph.D., associate professor of biology, on national biology module videos and with Mary Hutchinson, Ph.D., assistant professor of English as a Second Language (ESL) education, on an ESL research project.

One of the most unique projects the MIC was recently involved in was working with students and Penn State Lehigh Valley Library Director Dennis Phillips to create an ongoing Vietnam veterans oral and video history, which is the first of its kind in the entire Penn State Library System.

Over the past two years, the MIC has formed a partnership with ArtsQuest to offer a unique Musikfest video camp for high school students, becoming the only university in the Lehigh Valley to offer an opportunity for students to receive media only access to Musikfest, which is one of the largest free music festival in the country.

This spring, the MIC broadcasted a live commencement ceremony for the first time at a new location: the ArtsQuest Center at SteelStacks in Bethlehem.

The MIC’s cutting-edge technology and ability to serve multiple purposes on campus has made it a model for other campuses and other universities to use when developing their own video centers.

“We’ve done tours with representatives from other commonwealth campuses, as well as Temple University and West Chester University. Everyone is looking at ways to create video content in-house. We’re also currently assisting University Park in designing their own small studio for national television interviews,” said Keptner.

Faculty, staff, and students can visit the Multimedia Innovation Center in room 201 to rent equipment, record video and audio, and edit projects using one of our ten MAC computers, a green screen, news desk, one button studio, and much more!

“The videos produced by the MIC help to amplify our degree programs and the numerous student engagement activities from community service to study abroad programs,” said Krajsa. “Their library of videos online is a great compendium of the history of our student successes.”

Today Keptner and Campbell are looking to the future; constantly updating video equipment to stay ahead of the industry curve. Next up, the MIC will work on updates to its studio set and is planning to revamp the campus’s student media organization, which produces weekly newscasts about campus events.

The MIC continues to be an incredible resource for students, faculty, staff and even local high school students, since it was created three years ago. And it will continue to be an important part of what makes Penn State Lehigh Valley a hub for learning, creativity and innovation. 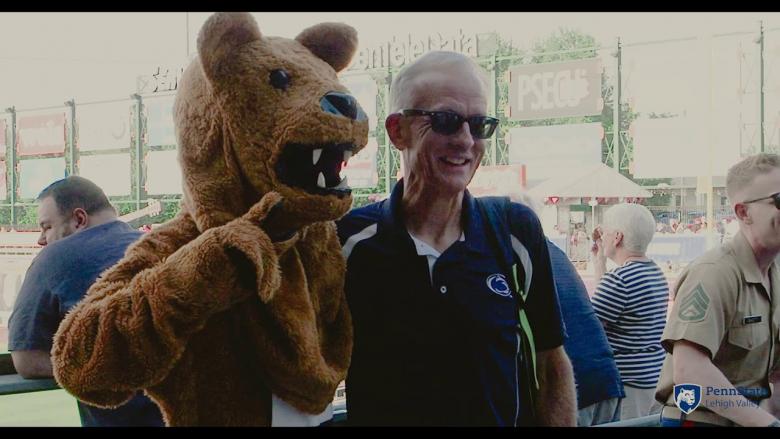 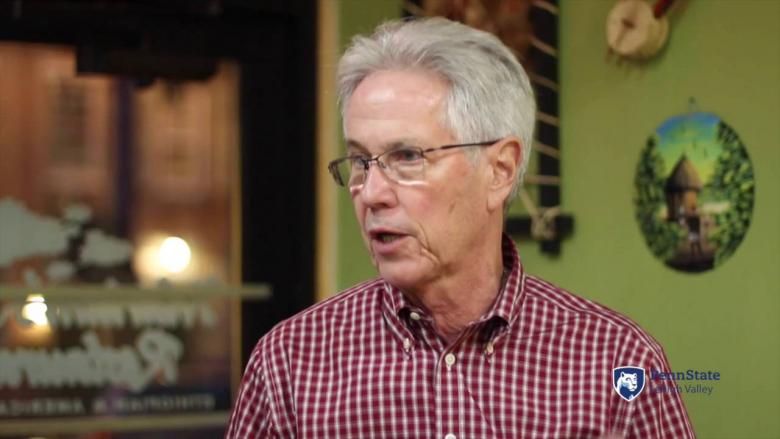 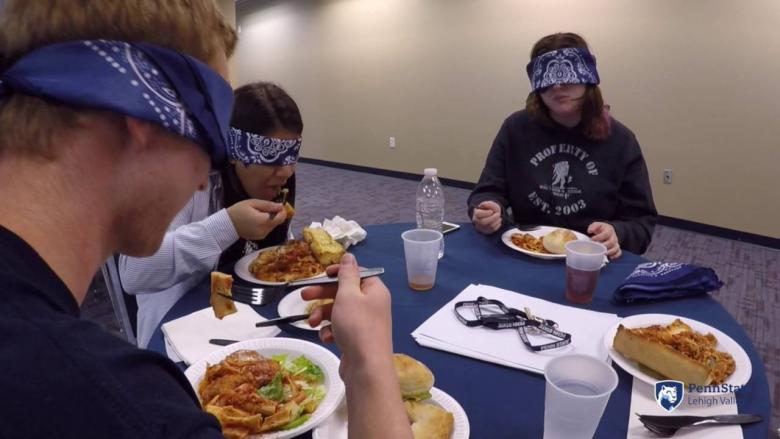 The LEO Club hosted Dining in the Dark