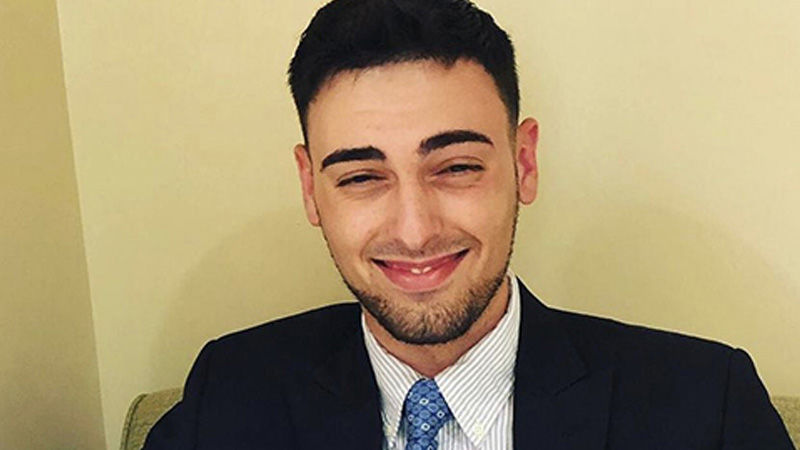 From about as far back as he can remember, Solomon “Sol” Taylor had dreams of becoming an entrepreneur.

His path to business success started at the tender age of 7, when he was closing sales in his father’s store. Eventually, he struck out on his own and founded Allentown-based The Phonekings Inc.: Taylor’s Discount Supplies, a fast-growing wholesale importing business specializing in Chinese-made products.

Taylor deals directly with Chinese manufacturers, so a thorough understanding of the intricacies of global supply chains and business practices is fundamental. No doubt, the 24-year-old Hellertown resident said, the tools he acquired from Penn State Lehigh Valley’s Project and Supply Chain Management (PSCM) program and Lehigh Valley LaunchBox powered by Penn State have proven critical to his success.

“Young entrepreneurs need to learn a lot of things. They might have great ideas, but because they’re so green it takes years to really get their business up and running at a high level,” said Taylor, a 2020 PSCM graduate. “At Penn State Lehigh Valley, I was able to take all the theory I was learning in the classroom and through discussions with my professors was able to apply it better to what was going on out in the real world. One of the benefits of going to a smaller campus is that you develop better relations with your professors, and you get more hands-on learning. If you want to really learn the curriculum, it’s much better to be in a smaller class where you can speak to your professor on a regular basis.”

The son of a career entrepreneur who found success in cell towers and cellphones, Taylor knew from a young age that he “wanted to sell.”

In his late teens, he decided to strike out on his own and go into the phone accessories business, since he knew the industry well.

“I didn’t want to be a brick-and-mortar dealer. I wanted to be able to supply dealers on the wholesale side,” he said.

Taylor started simple, selling chargers, phone cases and tempered glass screen protectors. He was making his purchases through the Chinese e-commerce company Alibaba but grew frustrated by all the middlemen standing between him and the factories manufacturing the product.

Ultimately, he realized he needed to deal directly with a Chinese manufacturer, locating one the summer before enrolling at PSU-LV. He placed a $10,000 order – he and his father put in $5,000 each – that made him extremely anxious. But, when his order sold out within five days of arriving, “I knew I had something,” he said.

“I worked every day for the next six months. And we really built that business,” Taylor said. “I sold 10 dozen accounts to gas stations, bodegas, small retailers, etc. And then we started doing farmers markets, which became like a traveling retail location. Next came wholesale and retail trade shows, where you’re dealing with a much bigger clientele. If you’re a good salesman and you have a good product, you can sell it anywhere.”

In time, Taylor’s product line grew to include Bluetooth products and other cellphone accessories. Recently, he branched out into self-defense items. He also does closeouts and liquidations where buyers can get significant discounts on a host of brand-name items.

Along the way, he’s become adept at Chinese business practices, which are “completely different from how Americans do business,” he said. He communicates with suppliers mostly through the WeChat app, and has significantly altered his sleeping habits to deal with the time difference between the U.S. and China.

“The way I look at it is, it’s not just a customer, it’s a partnership. If I do well, you do well. And that’s been a business model that’s helped me grow substantially,” Taylor said.

Taylor would be the first to say his business acumen grew considerably thanks to his studies at PSU-LV.

Initially interested in starting at Lehigh Valley and then finishing his degree at University Park, Taylor eventually decided to complete all four years at the campus once the PSCM program was added.

“I compared the cost of living and the cost of tuition, and I thought, ‘It’s a no-brainer,’” Taylor said. “A lot of students go for the college experience. I was there to get an affordable education. I received a lot of scholarships and grants, but working was what paid for my education. I didn’t want loans and massive student debt.”

He ended up excelling in his studies, graduating with a 3.96 GPA. Along the way, he developed a first-class support system among the faculty, among them Lecturer in PSCM Mark Capofari, Assistant Teaching Professor and Director of Business Programs Maung Min, Professor of Marketing Denise Ogden, and Lecturer in Economics and Corporate Communication Program Coordinator Bob Wolfe.

“They were all fantastic – I could say so much about each of them,” Taylor said. “It’s very beneficial to have good relationships with your professors, because you get even better insights on what you’re learning.”

"Sol is truly a global entrepreneur in every sense of the word,” Wolfe said. “He didn't wait to graduate to start on his venture – he was already well into the international electronics business when he took my classes. Sol’s business acumen for world trade is impressive, and his entrepreneurial venture allowed him to combine the classroom with the business world, which is an incredibly powerful combination."

Taylor took advantage of the program’s internship opportunities, and spent a summer studying abroad at East China Normal University in Shanghai. While there, he made it a point to visit factories and make connections with various businesses.

“I didn’t speak a word of Mandarin when I got off the plane, but I wasn’t worried at all,” he said. “I felt that the only true way I could learn was if I took classes there. It was a great experience, and I met a lot of great professors.”

Meanwhile, Taylor received additional assistance from Lehigh Valley LaunchBox, which provided him with a grant that allowed him to launch his website.

“That was invaluable. The website helps validate us and helped us get onto eBay, Walmart.com, Amazon, all these third-party platforms. I wouldn’t have gotten there without LaunchBox pushing me forward,” he said. “LaunchBox has also allowed me to connect with other new entrepreneurs with similar business models. If there’s something you’re lacking in, there’s always someone out there in the network who can help you with that. Networking is so key in business.”

As Taylor sees it, his business is now in a great position for substantial growth. One day, he would love to be in the position to be bought out by a major company.

“My goal is all about building wealth for the future. It’s about the long term,” Taylor said. “If I could preach anything to young entrepreneurs, it’s put your money to work. And put the time in to get there.”

And, make good use of the resources provided to you.

“I give a lot of credit to Penn State Lehigh Valley for how my business is doing,” he said. “I received a great education there.”