Donated by Michael J. Krajsa in Support of the Business Society 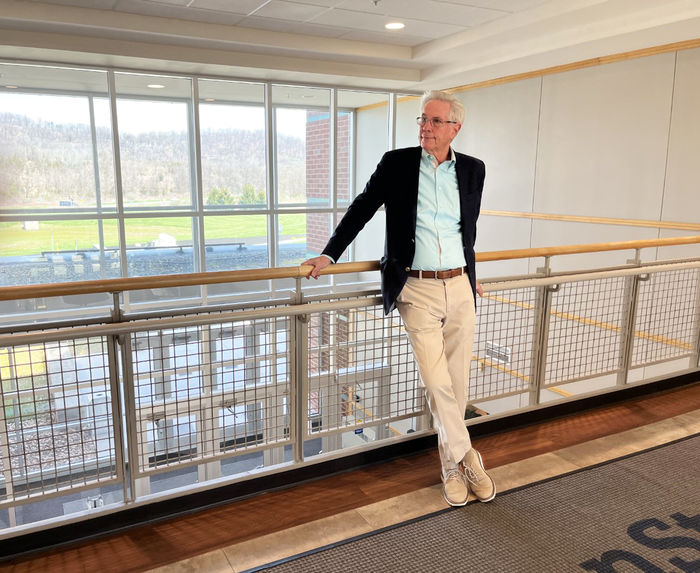 On the second floor of the Penn State Lehigh Valley campus Academic Building, just behind the Business Wall where you are reading this, you will see where Michael J. Krajsa or “Big Mike” as he was known to so many, positioned himself in between classes when the halls were full of students and faculty bustling from  one place to another. Often, his arms would be outstretched on the banister, an inclusive, welcoming gesture that told everyone, “I’m here for you; come and tell me your story.”  And students did tell Big Mike their stories. They also shared their hopes, dreams and challenges and he was always there to listen and help. His favorite mantras: “It is not who you know, it is who you let know you.” And “You’ve got to create your own weather system!” were two lessons he tried to impart to students.   Mike was also there to guide many students who were trying to figure out how exactly to put their futures in motion. A human “idea machine” Mike Krajsa’s mind constantly threw out ideas empowering people around him and many lives have been shaped by those ideas and his encouragement.

The grandson of Slovak immigrants, education and service, adventure, and curiosity were instilled in Mike by his parents at a young age, as he began honing his life skills as an Eagle Scout. He would go on later in life to expand these skills by hiking the Inca Trail, summitting Mount Rainier and wilderness backpacking in national parks.

As a twin engine instrument rated pilot, he learned through his aviation skills about training, flight planning, and the importance before each flight, and that the responsibility of agile decision making while in flight was the only way to get where you need to go, and he brought those strategic thinking skills and spirit to his life’s work.

In his 1967 valedictorian speech at Perkiomen Prep School, Mike told his audience:  “We each have an identity, and an obligation to maintain our individuality.” One of the most empathetic and individualistic people ever, Mike never stopped being who he was, whether it was baking a delicious and much appreciated cherry cobbler to bring to his co-workers or navigating the Great Wall of China with twenty students in tow, Mike more than fulfilled the obligation to maintain his individuality, and he urged his students and friends to do so also.

In college, as a student at Catholic University in DC during the late 1960’s his strong sense of social justice emerged by advocating during those transformative times, and he worked as a tour guide at the National Shrine. Upon graduation he started his career as press secretary to the Secretary of Welfare of Pennsylvania in Harrisburg, PA, while simultaneously completing his master’s degree at the Pennsylvania State University. He later served as a legislative aide in Congress and in 1980 he was a candidate for Congress in the 15th district in PA.

Mike never quite stopped being a tour guide, including serving as the executive director for tourism for Bucks County, PA, promoting area destinations. Mike was always discovering new places to go, people to meet and showing others the way to discover the most out of life for themselves.

As a publisher for Slovak v Amerike, the oldest Slovak human rights-based newspaper in the world, he attended White House and State Department briefings attended also by United States  presidents from Lyndon Johnson to Ronald Reagan.  Later he published a popular regional and feature monthly magazine in the Lehigh Valley, Valley Monthly Magazine, often tackling issues no other publication would touch.

He brought his servant leadership and strategic thinking skills to LifePath where he served as director of development and created the most successful fundraising event in the history of the organization and the most sustained fundraising event in the Lehigh Valley, the LifePath PICPA Thanksgiving luncheon, which has raised hundreds of thousands of dollars to date and is still a thriving endeavor each year. In 2022 it marked its twenty-fifth year.

His next career adventure was teaching, where he inspired students to create successful paths, whether he was motivating entrepreneurs at KU Tekpark, through Kutztown University or teaching MBA and undergraduate students at DeSales University. While at DeSales Mike was awarded the prestigious Association of Collegiate Business Schools and Programs (ACBSP) International Teacher Excellence Award for Creativity, Innovation and Community Involvement. At DeSales, Mike mentored students in SIFE (Students in a Free Enterprise) team, a team he began that traveled to Peru six times, and developed social enterprise outreach projects with Heifer International, and he hiked the Inca Trail.

At Penn State he served as assistant teaching professor where he was awarded the prestigious, university-wide Atherton Award for teaching excellence. As a three-time elected faculty senator who chaired the Senate Global Programs Committee, Mike was an advocate of short-term study abroad experiences, taking students to China, Peru, the Netherlands, Costa Rica, and Jamaica. He also hosted, in his home, several exchange students from India and China over the years.

Former student Olympic cyclist Mandy Marquardt ’14 recalled: “I walked into the classroom, and I found his energy to be inspiring. He asked the class, ‘What are you passionate about?’  I’ve never had a teacher ask me that before.”

Mike is a founding board member of the entrepreneurial Penn State Lehigh Valley Launchbox program, where he also served as faculty liaison to the community, faculty, and students.

A helicopter crash and two-time cancer survivor (Thank you PSU Hershey Urology!), Mike has gone from strength to strength in his life, he has encouraged countless others to do the same. The next time you pass the bridge, feel the warmth of Mike’s outstretched arms and ask yourself: “How will I create my own weather system?”  and “Who can I let know me today?”

Recommended books to understand and engage your potential:

Way of the Peaceful Warrior: A Book That Changes Lives
by Dan Millman

The Celestine Prophecy: An Adventure
by James Redfield

The Right Mountain: Lessons From Everest On the Real Meaning of Success
by Jim Hayhurst Sr.