UNIVERSITY PARK, Pa. — Three years ago, as a freshman who had arrived at Penn State from Oregon, Walter Bain's only knowledge of 3D printing was that it was useful outside of Earth's atmosphere.

“I took an introduction to technology course here at Penn State, and the only thing I knew about 3D printing at the time was that there was a 3D printer on the International Space Station that prints the parts that astronauts need," Bain said.

"[In that course] our professor talked to us about 3D printing at Penn State and mentioned that students could print for free," he continued. "I met with [him] after class, and he showed me the website Thingiverse, where I found a model of the Apollo 11 moon rover and I printed a replica of that, and I still have it today."

Bain now works as a maker-in-residence at Penn State’s Maker Commons and supports Penn State faculty and students in their free access to 3D printing technology. This fall, he and the rest of the team at Maker Commons have been getting the University community up to speed with upgraded 3D printing technology that has streamlined the printing process and expanded access to this unique teaching and learning tool.

“The original 3D printers used to launch Maker Commons had reached the end of their life cycle, so it was time to reevaluate the market in order to offer the best possible 3D printing experience to our faculty and students,” said Ryan Wetzel, manager of creative learning initiatives with Penn State’s Teaching and Learning with Technology.

In the spring of 2019, Penn State installed a bank of new 3D printers that improved the user experience in several ways, according to Wetzel.

“The new printers produce better quality prints at a faster rate than the previous ones, and they’re less prone to jamming or mechanical errors. That leads to fewer failed prints and delivers a faster turnaround from the print’s submission to when it’s ready to be picked up,” he said.

"Instructors like myself who don't have 3D printing on-site can easily implement a 3D project. Maker Commons' resources are easy to use, and the delivery of models via the interlibrary system is a practical method that accommodates students' schedules."

Along with the upgraded hardware, a significant software improvement with the new printers makes working with the system simpler.

"Students can access a cloud slicer from their internet browser," said Wetzel. "The slicer is a tool used to prepare their 3D model for printing on our specific printers. Previously, slicing required specialized software that students either downloaded and installed on their personal computer or visited a computer lab to use." 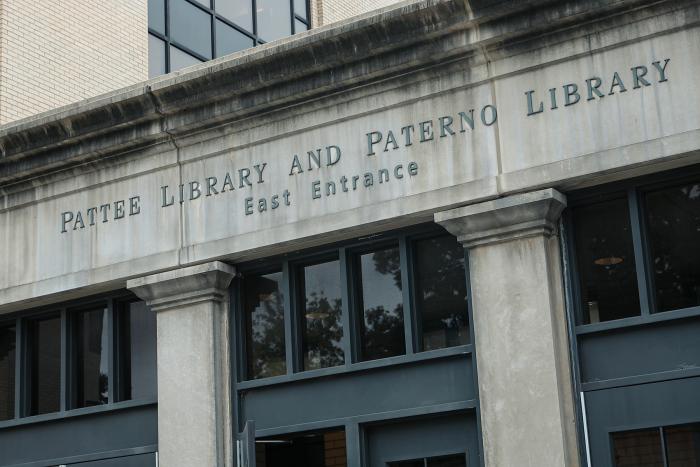 During this academic year, the new 3D printing system and staff at Maker Commons will support approximately 7,000 combined prints submitted between University Park and Commonwealth Campuses. That capacity, more user-friendly hardware and software, and the Interlibrary Loan Services that make it possible to deliver completed prints to any University campus, make it easier than ever for faculty and students to utilize Penn State's 3D printing technology.

Keith Ressler, a Penn State alumnus and research and development engineer with Penn State’s Applied Research Lab, taught a section of the electrical engineering senior design project and utilized Maker Commons’ new 3D printing system. Though his professional background gave him some exposure to and knowledge of 3D printing, this was the first time he incorporated it into students’ coursework. It was a little extra backing that enabled him to integrate the technology into his teaching.

“The support from Maker Commons staff provided a valuable lift to the ability to integrate 3D printed parts into the class and projects,” he said. “Some instruction on 3D printing basics gave us the needed understanding of the tools, file types, costs and more.”

After 20 years away, it was a walk through Pattee Library upon his return to University Park in July 2017 that led Ressler to discover Maker Commons and its 3D printing capabilities. A conversation with Maker Commons staff followed because he "understood the value of being able to rapidly turn an idea into something physical, but I needed questions answered about the barriers to entry for students who may not have a lot of experience with 3D modeling and additive manufacturing."

Christina Galbiati, a graphic design lecturer at Penn State Lehigh Valley, could not be in a situation more opposite of Ressler's. She has taught at Penn State for seven years, not two. Her campus is 170 miles away from Maker Commons and University Park. She teaches an introductory, general education course instead of a senior design project. Yet she shares Ressler’s goals of preparing her students with critical-thinking and 21st-century technology skills. She and her students also get to utilize Maker Commons’ state-of-the-art 3D printers.

"Instructors like myself who don't have 3D printing on-site can easily implement a 3D project," she said. "Maker Commons' resources are easy to use, and the delivery of models via the interlibrary system is a practical method that accommodates students' schedules." 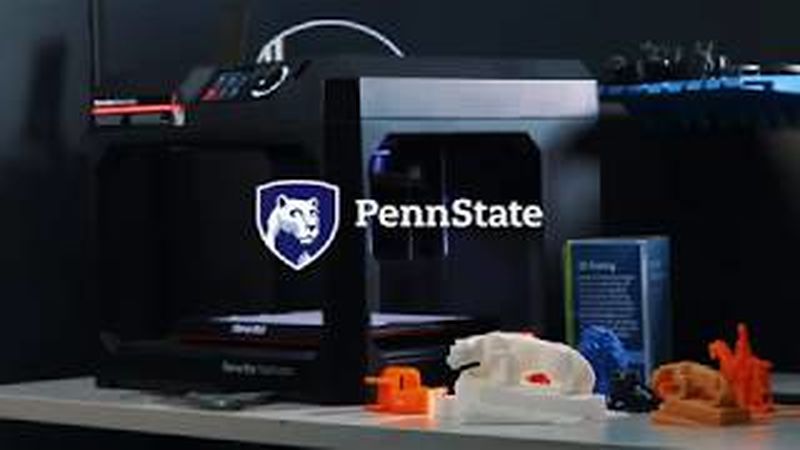 During the fall 2019 semester, the team at Penn State's Maker Commons in Pattee Library have been getting the University community up to speed with upgraded 3D printing technology that has streamlined the printing process and expanded access to this unique teaching and learning tool.

As Galbiati illustrates, a mix of technical and personnel resources allowed her to incorporate 3D printing as an accompaniment to her Adobe Illustrator project in her introduction to graphic design course.

“I work with Kate Morgan, Lehigh Valley’s director of virtual education, and Markus Fürer, the coordinator of University Park's Media Commons and Maker Commons," she said. "I also rely on Maker Commons' online portal, which helps streamline the design and printing processes."

The differences in Ressler’s and Galbiati’s cases ultimately help to illustrate 3D printing's wide-reaching potential to impact education positively. They both understand how working with the technology now will help students in their professional lives, regardless of their discipline.

“3D printing really helps develop soft skills like critical-thinking and problem-solving through print design, rapidly fabricating the print, testing it, and iterating as necessary to meet your needs,” said Ressler. “An unstated benefit is the ability to bring something to a team that isn’t yet the norm for the cycle of development. For example, you can design a part one day, have it in your hand the next, and never have to engage purchasing or a supply base.”

Galbiati added that "prospective employers are requesting both organic 'out-of-the-box' thinking that drives innovation along with 21st-century technology skills, and 3D printing projects are a practical way to develop these skills in tandem.”

She also noted that “3D printing isn’t an immediate outcome; it requires a great deal of planning and multitasking. So, it’s a great way to hone time-management skills.”

While Penn State has made great strides to lower the barrier of entry to 3D printing, innovators and technology leaders like Wetzel are working to erase the barrier altogether.

"A roadblock to a successful 3D printing experience for students and faculty is difficulty in creating relevant and useful 3D models," he noted. "Modeling can be a complicated process that requires the use of software that has a big learning curve. So, we’re experimenting with a high-end 3D scanner that should make it much easier to convert real-world objects into 3D models.”

Interested faculty and students can get hands-on experience with the new scanner by visiting the Immersive Experiences Lab in 109 Agriculture Sciences and Industries Building at University Park.

As the University continues to enhance its 3D printing capabilities, Galbiati looks forward to more students sharing experiences similar to her students.

“[They] remarked how it has enhanced their creativity and how much they enjoyed learning about the overall process,” she said. “Many were not expecting to learn about this technology in an elective class and were pleasantly surprised to discover it was easier than they expected.” 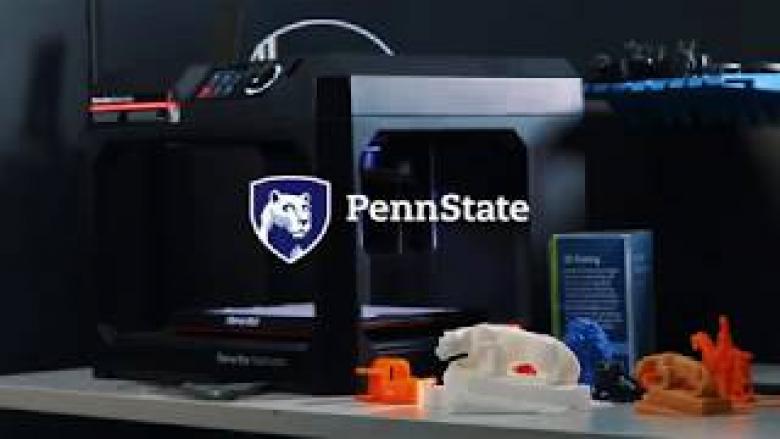 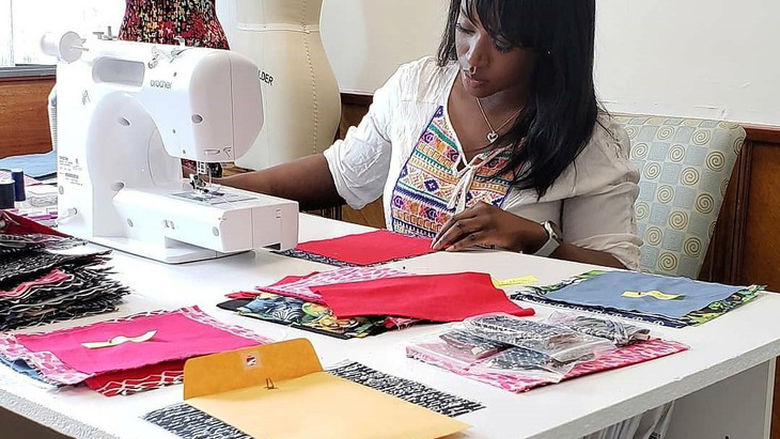