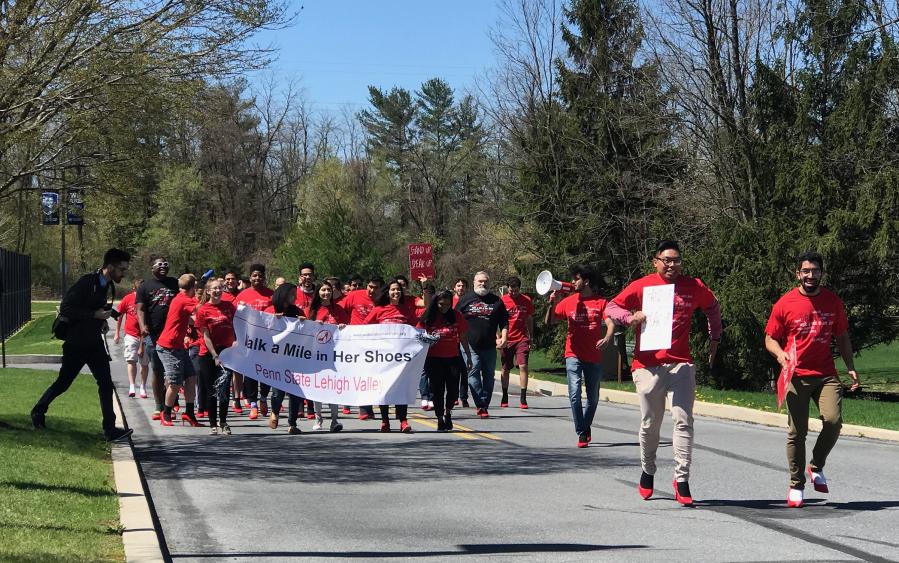 The campus community came out for the fifth annual Walk a Mile in Her Shoes event held April 16 at the Lehigh Valley campus. The march in red heels started at the sports court.

CENTER VALLEY, Pa. — More than 60 male students, faculty, staff and alumni participated in the fourth annual “Walk a Mile in Her Shoes” march on April 16 at Penn State Lehigh Valley. The march was an opportunity for men to come together to raise awareness of, and peacefully protest against sexual violence. The event was open to the public and all who participated were given a free t-shirt and the option to donate to the Valley Against Sex Trafficking (VAST).

“This issue is prevalent in society today, including in our own community. It’s important that we all become aware and educated on how we can help,” said Pam Fleck, assistant director of student affairs at Penn State Lehigh Valley. “For the fifth year in a row, our entire campus community has come together to support the purpose of our RISE club and the mission of the Walk a Mile event.” 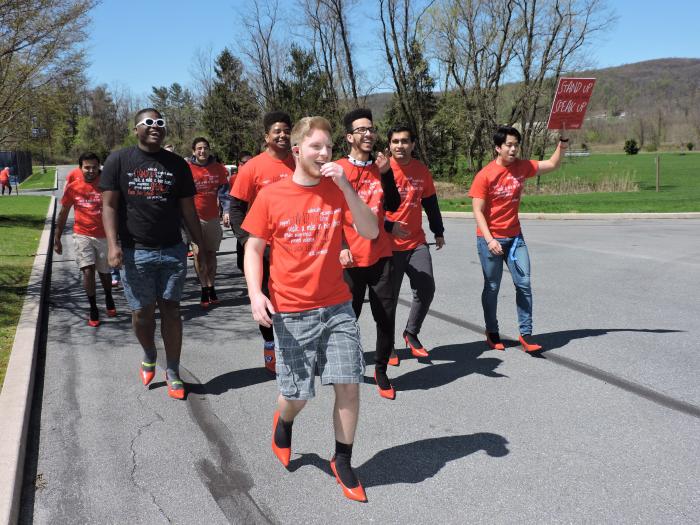 The march held April 16 on the Lehigh Valley campus was an opportunity for men to come together to raise awareness of, and peacefully protest against sexual violence.

All male participants donned red 4-inch high heels and began their march at the Sports Court at the Lehigh Valley campus and finished at the Nittany Lion shrine. After the march, Naseeba Saeed, a senior at Penn State Lehigh Valley, who is president of RISE, introduced Tashina Khabbaz, a representative of VAST, who then spoke to the attendees. Khabbaz is a Penn State Lehigh Valley alumna who is currently a doctoral student at Lehigh University. Her research involves studying sex trafficking. Khabbaz shared some statistics of human trafficking and explained how we can help with awareness.

“Across the world, there are 45 million people who are being exploited as we speak; the majority in sex trafficking. In the U.S. alone, sex trafficking is a $32 billion industry and the average age a person falls into sex trafficking is 12-14 years old,” Khabbaz said. “Fear hinders people from finding an escape. We need to continue to raise awareness and have courageous conversations about our oversexualized country to address this issue.” 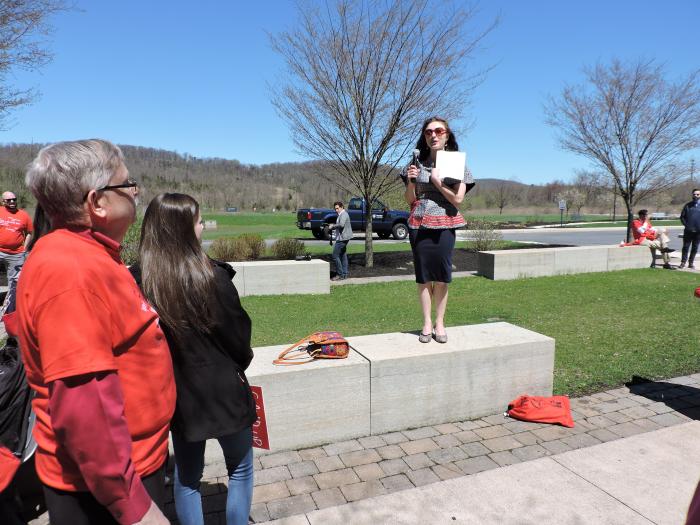 Tashina Khabbaz, a representative of VAST, spoke to the attendees of the fifth annual Walk A Mile in Her Shoes. Khabbaz is a Penn State Lehigh Valley alumna who is currently a doctoral student at Lehigh University. Her research involves sex trafficking.

Jawad Khawaja, a first-year information sciences and technology student at Penn State Lehigh Valley, participated in the march for his first time.

“As an executive board member of RISE, I felt it was important to participate. This event helped me put myself in women’s perspectives and I hope it raises awareness,” Khawaja said.

Tim Hunt, a sophomore psychology student at Penn State Lehigh Valley, ran in the event for the second year.

“I don’t march, I run because I want this problem to be solved quickly. I like participating because I want to advocate for those who are less fortunate and help those in need like the victims of sex trafficking,” Hunt said. 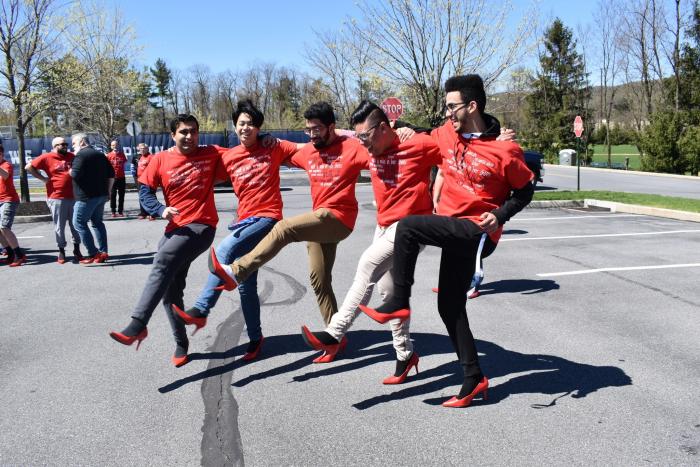 Penn State Lehigh Valley students formed an impromptu kick line before the fifth annual Walk a Mile in Her Shoes event on April 16 held at the Lehigh Valley campus.

The mission of RISE is to unite and empower Penn State students to rise up against sexual violence, abuse, trafficking and exploitation in our community, through awareness prevention, action and aftercare.

Walk a Mile in Her Shoes is an international men’s march to stop rape, sexual assault and gender violence, a movement that was created by Frank Baird in 2001. The Valley Against Sex Trafficking is a non-profit organization dedicated to ending human trafficking and sexual exploitation.

The event was organized and sponsored by the Office of Student Affairs in collaboration with the student club RISE and Campus Engagement Committee and funded by the student activity fee. 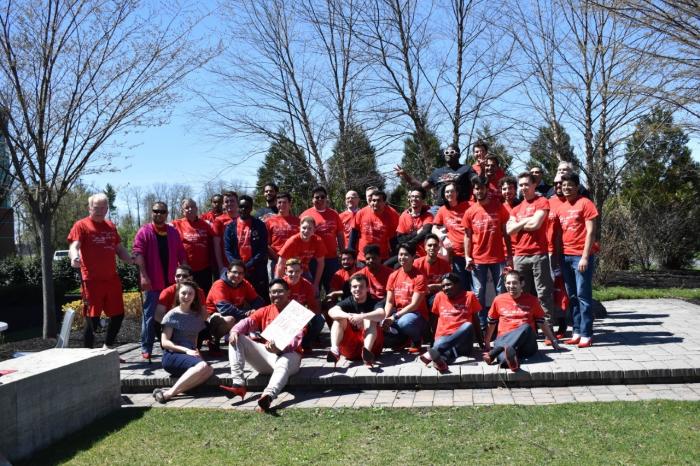 More than 60 men participated in the fifth annual Walk a Mile in Her Shoes held April 16 at the Lehigh Valley campus. 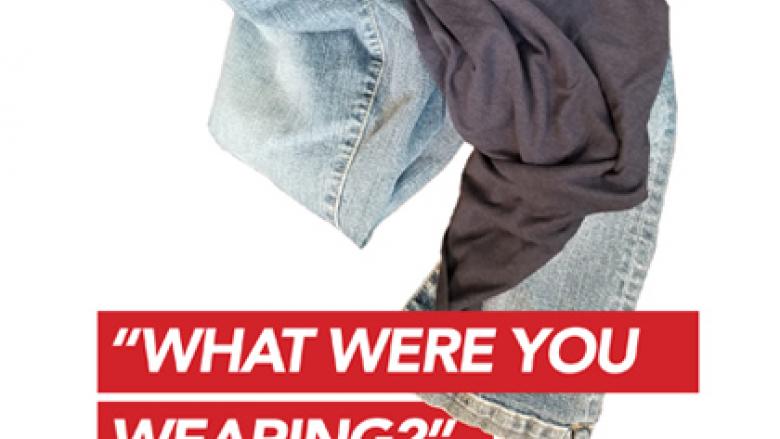 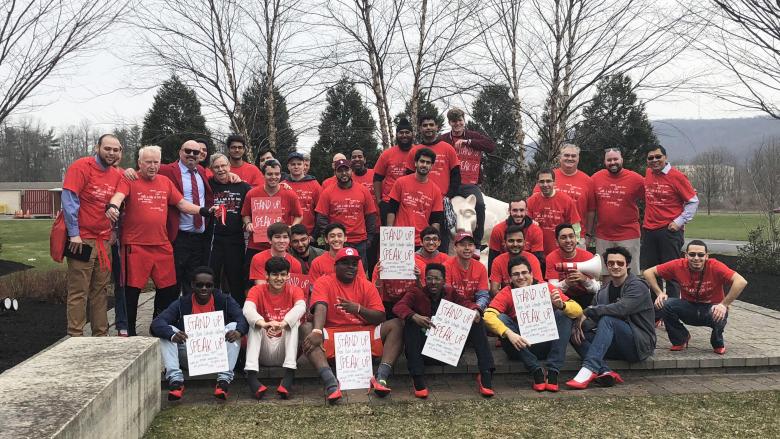 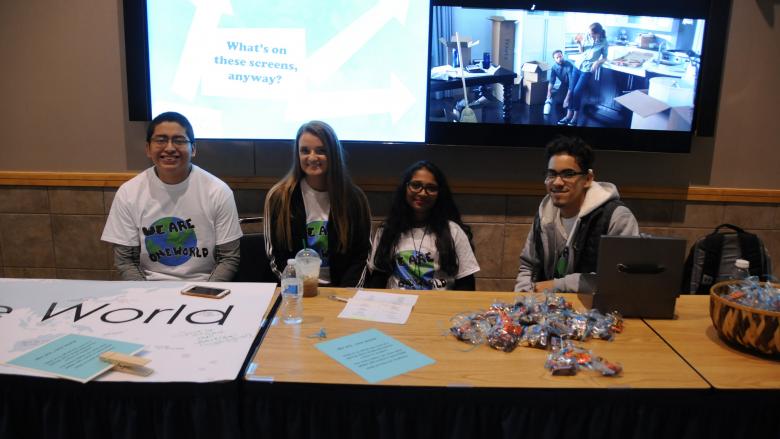