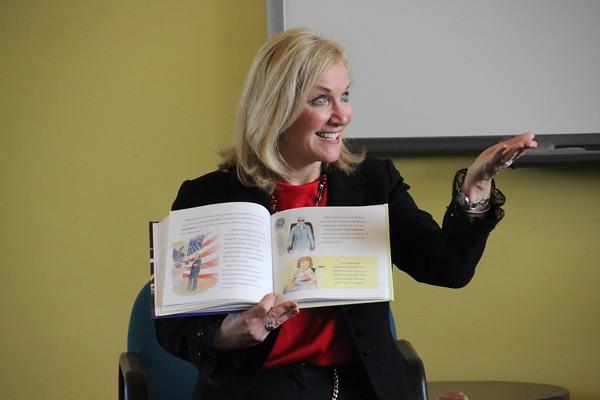 Nichola D. Gutgold, professor of communication arts and sciences at Penn State Lehigh Valley, recently did a reading of her re-released children's book.

Children's book was co-written with lecturer from Penn State Abington
May 21, 2019

Eifrig Publishing is re-releasing the updated book, which now includes five women currently running for the U.S. presidency in addition to the five historical women who paved the way for the presidency. It was originally published in 2014. Illustrations were done by Jane Ramsey, who is a well-known artist from Bucks County.

Gutgold is available to read the book to local schools and libraries.

In addition to her work with students, Gutgold is a distinguished researcher on the rhetoric of women in male-dominated fields, and on how all women can use their voices to lead whatever passionate cause they believe in. Her research has been featured in The New York Times, San Francisco Chronicle, LA Times, NPR, PBS and U.S. News and World Report.

Gutgold serves as vice president of the Literacy Center’s Board of Directors and mentors students, especially those who are first generation, to expand their future goals. She recently received one of the Alumni/Student Awards for Excellence in Teaching from Penn State, and was named a 2018 Penn State Teaching Fellow. She received the 2017 King’s College Alumni Award for Professional Achievement. Last year, she was honored as a 2018 Woman of Influence by Lehigh Valley Business.