John Lahutsky prepared to process in for the 2019 Commencement ceremony on May 4 with 110 of his classmates from Penn State Lehigh Valley (PSU-LV) at ArtsQuest Center at SteelStacks in Bethlehem, Pennsylvania.

“I’m a story teller,” said John Lahutsky. And John has quite the story to tell—his own.

He graduated with a degree in corporate communication on May 4 with 110 of his classmates from Penn State Lehigh Valley (PSU-LV) at ArtsQuest Center at SteelStacks in Bethlehem, Pennsylvania.

John has had an eventful and, at times, challenging road to earning a college degree. There were times in his life when going to college seemed impossible. 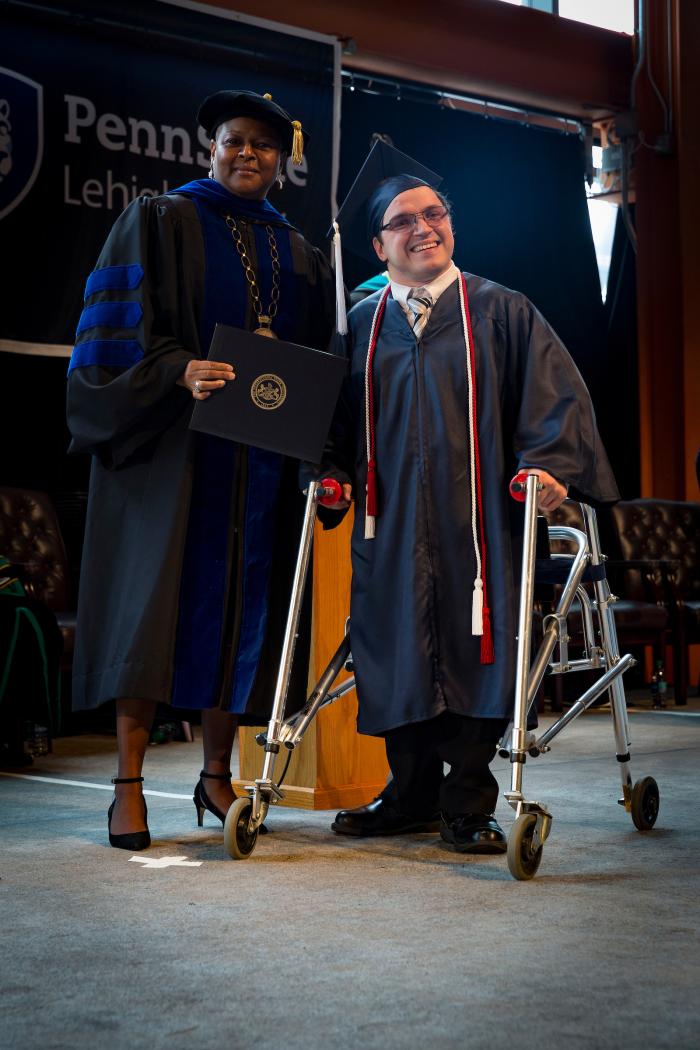 PSU-LV Chancellor Tina Q. Richardson and John Lahutsky posed for a photo after Richardson awarded Lahutsky his degree at the 2019 Commencement ceremony held May 4 at ArtsQuest Center at SteelStacks in Bethlehem, Pennsylvania.

A thirst for knowledge

John spent the first nine years of his life in Russia. He was born early at 24 weeks with cerebral palsy. He uses a walker to get around. John and his sister were abandoned by their birth parents when John was 18 months old. He spent his early years in a Russian orphanage, known as a baby house, with 15 other babies and one staff member. He received limited interaction from adults and had no life experiences. Due to his birth defect, the baby house staff had low expectations for John, and they did not allow him to go to school in Russia.

Instead of school, John was moved to a mental asylum for nine months at the age of 5. He credits two of his friends, British couple Alan and Sarah Philps, with saving his life. When Sarah discovered John had been placed in the asylum, she urged Alan to write an article for the Daily Telegraph exposing the horrible conditions of the asylum’s children wing. Alan published the article, and this exposure helped get the child removed from the asylum. He was placed back in the baby house and eventually in a foster care home.

John’s life changed when he was adopted by Paula Lahutsky, a school psychologist from Bethlehem, Pennsylvania.

“I wasn’t thinking about adoption. But I had read about John in my church’s bulletin. I just knew it was the right thing to do. I did it as a single mom. There was never really any doubt in my mind though. I loved him before I saw him,” Paula said. 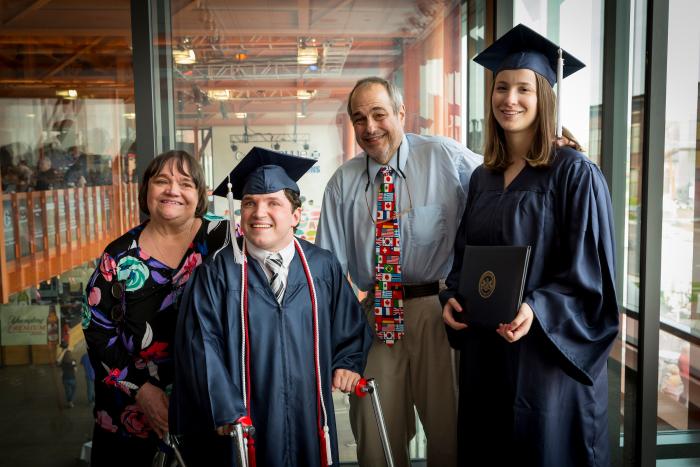 Paula and John Lahutsky celebrated with David and Anna Quatrone after the 2019 Commencement ceremony held May 4 at ArtsQuest Center at SteelStacks in Bethlehem, Pennsylvania. David and his wife Valeria Sajez adopted their two children (Andrej and Anna) from Russia where they learned of John. They returned home and put an ad about John needing a home in their church bulletin, which is how Paula found out about John and decided to adopt him. Anna Quatrone graduated from Penn State World Campus with a bachelor of arts degree in political science.

Even though John did not speak English when he arrived in Bethlehem on Aug. 18, 1999, Paula knew he wanted to go to school. John was aware of what school was when he was in the foster home and felt like he was missing out.

“When he had the chance to come to school in the U.S., he was like a little sponge. By Christmas, he was fluent in English,” Paula said. “I think because he had no formal education until the age of 9, he recognizes the value of an education. Even with his challenges, he always wanted to go to school each day. He finds a way to deal with obstacles; nothing seems to stand in his way or upset him.”

John co-wrote a book, “The Boy from Baby House 10: From the Nightmare of a Russian Orphanage to a New Life in America” with Alan in 2009 that details his life up until age 19, but what has transpired in John’s life over the last 10 years is worthy of a book as well.

After graduating from Freedom High School, John attended Northampton Community College (NCC) from 2011 to 2015 where he earned his associate degree in communication studies. He then came to PSU-LV in 2015. It is John’s positivity and tremendous work ethic that he is known for on campus.

“John is kind, thoughtful, personable and optimistic. He shows generosity of spirit. He really became a leader on our campus and has excelled. I am delighted to get to witness him finishing his degree. It’s incredible.”

Cundari served as John’s adviser when he was at NCC. John called Cundari an “amazing” support.

“I knew he was bright enough to earn a degree, but there are accommodations to think about. John was successful at NCC, but Penn State Lehigh Valley is really the perfect fit for him. He has come into his own at Penn State. He found a lot of support there and he’s grown up and felt very comfortable,” Paula said. 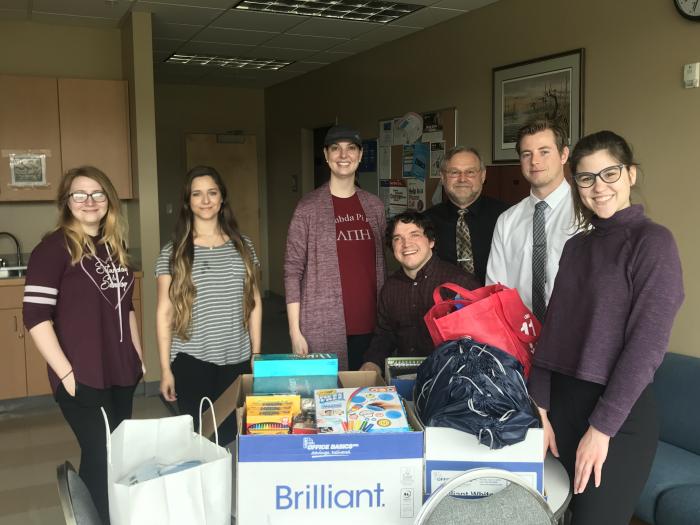 During his time at PSU-LV, John served as president of Lambda Pi Eta, the official honor society of the National Communication Association. In this role, he has facilitated several community service projects, including a stocking stuffer drive for homeless veterans, working at local family centers and animal rescue farms, and a donation drive for Second Harvest Food Bank and Valley Youth House. He also served on the Facilities and Maintenance committee of Student Government Association.

“I liked Penn State Lehigh Valley because I could stay for four years and be close to home. The fact that it is one building made it easy to navigate. And everyone here is so encouraging and supportive… I feel I’ve really grown in my confidence and abilities here!” John said.

Giving back through service, in the community as well as on campus, is very important to John. He has been on the board of the Miracle League of Northampton County since 2010 and serves as an assistant coach. He earned Eagle Scout status in 2013. For his Eagle Scout leadership project, John collected more than 850 pounds of new clothing and raised nearly $5,000 to cover the shipping costs for Warm the Children, a church-based charity that provides brand new clothing and other necessities to children in orphanages in Eastern Europe and Greece. He is currently a member of the troop committee for Troop 362 Minsi Trails Council, Boy Scouts of America. John is also a member of the National Slovak Society, Assembly RO59, a fraternal organization that raises funds for local, national, and international charities.

“John is involved with so many nonprofits. Since he was young, through both Cub Scouts and through church, he always thought of helping others,” said Paula. “It’s who he is. He is always kind.”

John is quick to point out that he can, and does, normal everyday things.

“I don’t let cerebral palsy stop me. I go camping, I have taken martial arts classes. I can do everything that other people can do,” John said.

At the PSU-LV Student Awards Ceremony held at the Lehigh Valley campus in April, John was awarded the Heart of the Lion Award, which is presented to a PSU-LV student who has overcome notable obstacles of any kind, and has demonstrated grit, gumption and sheer determination.

“John is the most gracious, humble, and inspiring individual I have had the pleasure to read about, speak to, and get to know here on campus,” said Heather Amatore, administrative assistant at Penn State Lehigh Valley. Amatore was one of multiple people who nominated John for the Heart of the Lion award.

“Simply by being himself, John reminds us all that his physical limitations make him differently abled in his pursuit of excellence and education,” said Beth Michalec, lecturer in corporate communication at Penn State Lehigh Valley. “Our corporate communication degree program and campus community are lucky and better for having John Lahutsky as a student.”

“The corporate communication major was perfect for me. I love what it offered with writing, marketing, event planning. There are a variety of options. I love communicating with people. It’s who I am. I love being around people and my communication professors have been amazing!” John said.

“John is the type of student any faculty member would love to have in their program… John has shown leadership, campus engagement, scholarship and professionalism.  John is a great example of a truly dedicated student," said Bob Wolfe, faculty adviser and coordinator of the corporate communication program at PSU-LV. 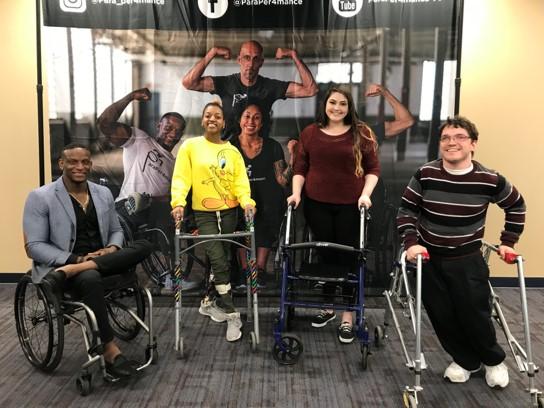 John Lahutsky (right) served on a Student Disability Panel earlier this year at Penn State Lehigh Valley with three other students. The panelists shared the challenges they face with their fellow students, and described how they want people to interact with them and treat them as human beings.

To students with disabilities considering going to college, John advises do not be nervous.

“If you ask for help, you’ll receive it. Do not be afraid to be a self-advocate. No one will spoon-feed you. Both at NCC and PSU-LV, I got great help. And don’t be afraid to experience what college can provide!”

In the days before commencement, John shared his current state of mind.

“I loved my time at Penn State Lehigh Valley. I have been reflecting on all of the hard work I put in, all of the help I got from my professors and friends, and on how much this campus means to me,” John said.

John drew a standing ovation as he walked across the stage at the ArtsQuest Center during the commencement ceremony on May 4. His mother, Paula, was beaming with pride. The feeling in the room was one of pure joy. It was clear in that moment: John had impacted the Penn State Lehigh Valley campus community just as much as it had impacted him. 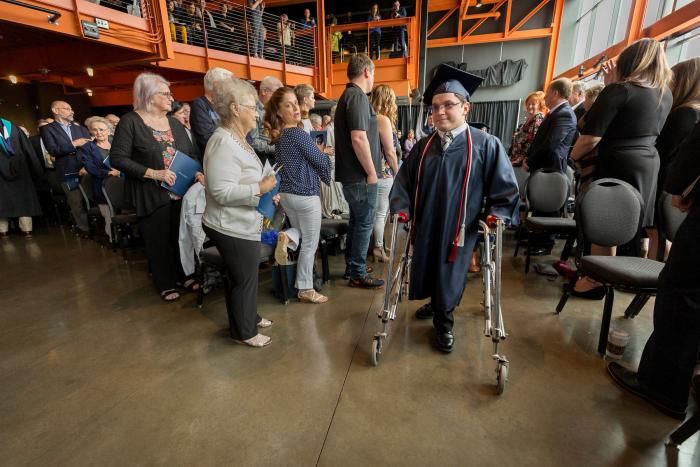 John Lahutsky processed in to the commencement hall on May 4 for the Penn State Lehigh Valley 2019 Commencement ceremony held at the ArtsQuest Center at SteelStacks in Bethlehem, Pennsylvania.

John is doing his final internship this summer with Valley Youth House in the marketing department. He said he plans to stay in the Lehigh Valley and wants to be involved with Penn State Lehigh Valley Alumni groups. 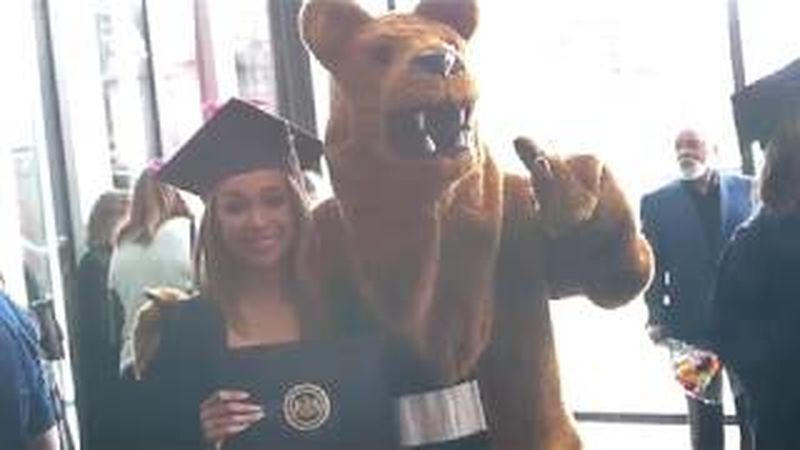