Donations made during Giving Tuesday 2019 will support a Veteran and Adult Learner lounge at the Lehigh Valley campus.

CENTER VALLEY, Pa. — Penn State Lehigh Valley (PSU-LV) is raising funds to furnish a dedicated Veteran and Adult Learner Lounge on Giving Tuesday. Giving Tuesday is a global day of giving fueled by social media and collaboration. It is celebrated on the Tuesday after Thanksgiving and kicks off the charitable holiday season. This year Giving Tuesday will be held on Tuesday, Dec. 3. The fundraising window opens at 18:55 (6:55 p.m.) on Monday, Dec. 2, representing when Penn State was founded in 1855, and ends at 11:59 p.m. on Tuesday, Dec. 3.

Donations made during this time frame through the PSU-LV Giving Tuesday website will support the lounge, which will honor student veterans’ service and be a space where they can meet alumni and new colleagues. Each year Penn State Lehigh Valley educates more than 1,000 students. The campus is designated a military-friendly school and enrolls a growing population of student veterans, with adult learners making up 1 in 5 students.

“Our student veterans served to help keep our country safe and now it’s time for us to serve them. This lounge will support their transition to college life,” said Tina Q. Richardson, chancellor of Penn State Lehigh Valley. “We know veterans and adult learners have different needs from traditional-aged students. They may prefer a quiet place to decompress in between classes or want a space where they can socialize with people who have had similar life experiences. This lounge will support their needs.”

“Howard and Shane’s challenge gift is intended to motivate others to donate and we thank them for their generosity! Let’s show the Lehigh Valley that Penn Staters care about their student veterans and adult learners on Giving Tuesday,” said Diane McAloon, director of alumni relations at Penn State Lehigh Valley. “The University is again showing special appreciation for young alumni who give back by giving their donations an even greater impact. We need everyone’s help, especially from our young alumni!”

Graduates of the last decade (GOLD) who contribute to a #GivingTuesday campaign with a gift of $5 or more will receive a 1:1 match from the University, up to $100. The University will match funds up to $2,000. 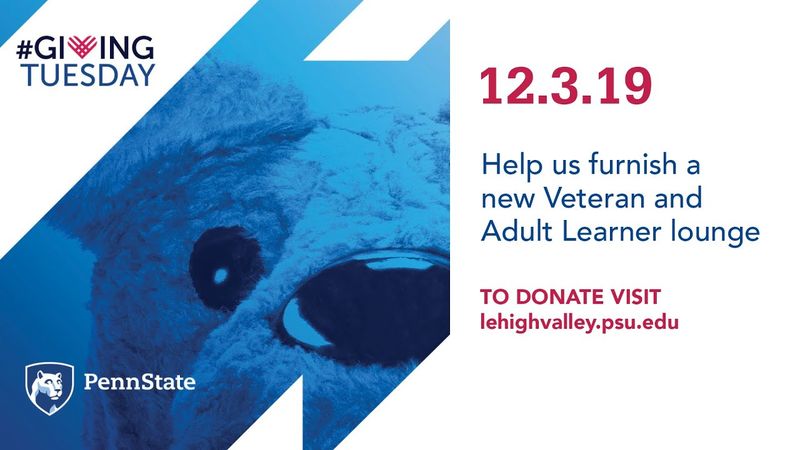 Penn State Lehigh Valley is raising funds to support a new Veteran and Adult Learner lounge for #GivingTuesday 2019 on Dec. 3.

Philanthropic support for Penn State students, faculty, research and programs has always been a part of the University’s major priorities. With the continued partnership of alumni and friends, Penn State’s historic mission to serve the public good and create a better future for students, the commonwealth and the world can be fulfilled.