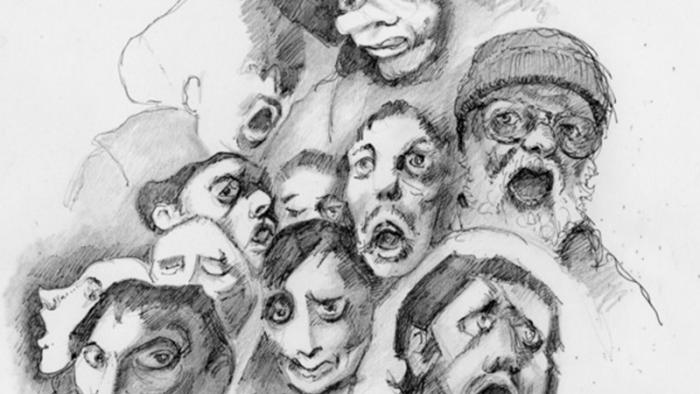 A portion of a sketch by Gothard, which is displayed in the Ronald K. De Long Gallery for the William & David Gothard: Father & Son, Humor & Pathos exhibit.

William Gothard (1932-2015) was born in Brooklyn and later resided in Pennsylvania. He was a prolific artist, working in his studio nearly every day. Though he is known best as a painter, he was a consummate draftsman. His drawings offer additional insight into his process and sensibilities. He deftly recorded his humorous observations of man's folly, his outrage over injustice, and his tenderness for his family. His son David inherited this passion for drawing and chose a career in illustration. He graduated from Pratt Institute where he now teaches drawing classes in the Fine Arts department. As an illustrator, he has been a regular contributor to the opinion pages of major publications, where he imbues his drawings with humor and pathos. He has also created art for advertising campaigns and children's books. This show reveals the artistic continuity between father and son.